Home › Breakdowns › There is no Pay Gap. Here’s Why…

There is no Pay Gap. Here’s Why…

One of the misconceptions of modern-day Feminism is, “Women get paid 23% less than men.” This is widely known as the Pay Gap or Wage Gap. This is simply not true. There is a misunderstanding between between wages/salary and earned income. This post will deal with the differences in the terms, the Equal Pay Act, and why this is a misconception. This is in hopes that you will see the Pay Gap does not exist.

Wage as defined by Merriam-Webster:

A wage is hourly. This means you get paid for the hours you work. Tradesmen, restaurant service employees, and convenience store workers are three examples.

Salary as defined by the same dictionary service:

This is a form of payment that does not include overtime, unlike a wage earner above. Let’s say your salary is $500.00/wk. For a forty-hour week that would mean you would be making $12.50/hr; however, if you work 60 hours/wk, you’ll only be making $8.33/hr. Your salary does NOT go up when you work more hours.

As defined by IRS.gov

This is also known gross pay, what you have made before they take out taxes. This is also where the myth of the Wage Gap was born.

Now for something based in law.

It was John F. Kenney who signed the Equal Pay Act in 1963. He is quoted as saying upon signing, “I AM delighted today to approve the Equal Pay Act of 1963, which prohibits arbitrary discrimination against women in the payment of wages. This act represents many years of effort by labor, management, and several private organizations unassociated with labor or management, to call attention to the unconscionable practice of paying female employees less wages than male employees for the same job.” (Click the link to read more of what he said.)

President Kennedy saw the problem, and went about fixing it. Here is a little about what the law states:

“”(d) (1) No employer having employees subject to any provisions of this section shall discriminate, within any establishment in which such employees are employed, between employees on the basis of sex by paying wages to employees in such establishment at a rate less than the rate at which he pays wages to employees of the opposite sex in such establishment for equal work on jobs the performance of which requires equal skill, effort, and responsibility, and which are performed under similar working conditions, except where such payment is made pursuant to (i) a seniority system; (ii) a merit system; (iii) a system which measures earnings by quantity or quality of production; or (iv) a differential based on any other factor other than sex: Provided, That an employer who is paying a wage rate differential in violation of this subsection shall not, in order to comply with the provisions of this subsection, reduce the wage rate of any employee.”

This is the meat of it, but if you want to read the rest of it, click here.

So, with this law in place and being actively enforced, why are feminists and their supporters still screaming about a Wage Gap? Let’s take a look.

From the chart above, we can see that, on average, men work more than women. This results in higher earned income/earned wages. This is a direct correlation to “more work=more pay”. This does not mean women get paid less, it means they work less, and thus earn less money than their male counterparts.

Before we get into this in more detail, take into account, when you average all industries/careers of men and women, there will be a disparity, but it is not due to a gap in pay. It is mainly due to career choices, time spent on the job (as stated above), and leave (whether paid or not). When you compare individual industries, which I will do below, you will see women get paid the same as men, but they earn less because they undersell themselves or choose careers with historically lower salaries.

These fields are in demand today, but how many women versus men work in this field? In the competitive world of the tech industry, offers are made for salaried positions. This means the employer will give the interviewee a low-ball figure, and it is up the the interviewee to recognize this and negotiate.

Table number one, taken from the site looks like this: Though this table may be elicit smug smiles from the feminist movement, it cannot be determined whether the 3% difference in offers is due to discrimination, or the female interviewee not knowing her worth or how to negotiate.

Though this may also back-up the Wage Gap claim, keep in mind, on average, women’s expectations in this job market are about $14k less than their counterparts. If you refer to the link above, it will explain it in greater detail. As you can see, the gap only grew when more men were hired.

This is something many fighting for the myth overlook. The more experience you have, the more you will be offered. You would think this means a woman with a year’s worth of experience would be worth more then a man, but if the female interviewee does not know the “art of the deal”, they can sell themselves short. 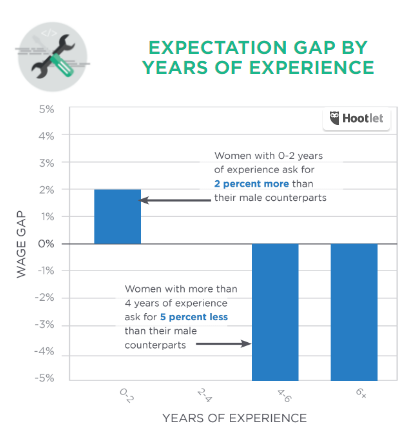 Notice how the table says “…ask for 5% less…”? This is what I mean by selling themselves short. By not knowing how to work a negotiation, the female interviewee will ask for less money and receive the job on that premise. Why doesn’t the employer make a higher offer? Simply put, they are protecting their bottom line by accepting a lower offer.

Now for the crux of the matter. Why do feminists cry foul?

This can be disproven by showing you a table comparing how many females v males there are in some industries. This was done according to how many of each gender were or are still in the fields. The trend we are seeing in this graph shows females are more likely to take jobs in support or teaching roles (with a few exceptions), and men are more likely to seek employment in tech and management fields. Support and teaching roles have historically lower wages than tech and management fields. So, when you average all fields together and compare them as a lump sum, it looks like women get paid less, and therefore looks like a gap exists; when in reality, when you compare wages by industry, the only gap in existence is the one created by making poor negotiations during the hiring process.

I hope this clear it up. All sources are listed as links in the body of posts, and I tried to find the most recent statistics.

Like Loading...
‹ A relative has a clue…
How far down the rabbit hole do we need to go? ›