There is NO Rape Culture, Just Women Screaming Wolf… Strong language in post

I found this on the internet. I would site the source, but I can’t find it. It isn’t mine, but even though it speaks volumes of truth, there is a problem. This can be used to perpetuate the myth of rape culture. Yes, it’s a myth. When you click to continue reading, you are going to be privy to a couple of confessions about me. So, consider yourself warned. 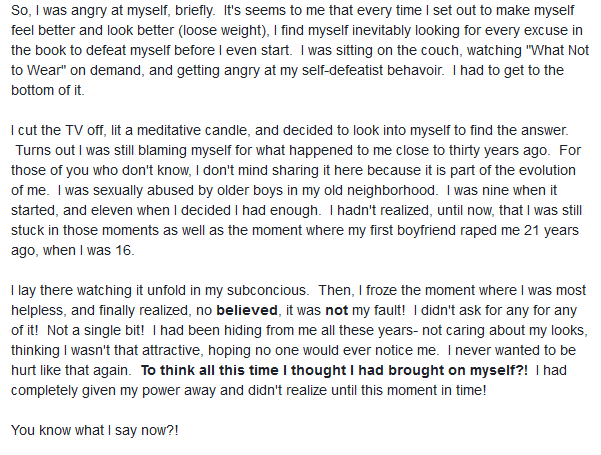 This is a snippet of a note from my Facebook from Aug, 2011. This was when I finally stopped being a victim and became a survivor. Do I want people to feel sorry for me because this happened? No, not at all. Do I want to grab a sign and buy into all the rhetoric out there about rape culture because of what happened to me so long ago? No, I don’t.  I will put the last part of the notes further down in this post, but first, let me define, to those who seem everything is harassment and rape, what those actually are from someone who has been there and wished she hadn’t.

When I was 16, he held me down turned me on my stomach and proceeded to fuck me in my ass without my consent. He had asked. I said no. He had overpowered me, and didn’t stop until he heard me crying and begging for me to stop. That is rape.

What is NOT rape…

Pursuing a guy at a party, getting drunk at said party, having consensual sex with him and then claiming rape because you woke up the next morning and realized you had made a mistake. THAT is regret sex, not rape.

Having consensual sex with a man, finding out that you are NOT the only one and conspiring with the other females to claim rape and ruin his life by having him convicted and sent to prison because you couldn’t handle being cheated on. You got played. He didn’t rape you. He was just playing the field.

What is NOT molestation.

Someone pinching your ass. That, my good feminist, is sexual harassment.

Deliberately rubbing himself up on your tits while you are clothed. Again, that is sexual harassment.

Standing too close to you on the elevator so they can rub up against you. Again, harassment.

Teach them not to rape.

Riiiiiight, like all the families who raise boys to be men tell them to have their way with girls, “Because that’s what boys do.”

No, just fucking no. “Boys will be boys” is a phrase that referred to small boys playing in the yard and finding as much dirt as they could to get into while playing and coming back in the house filthy. It was never a phrase to excuse the abhorrent behavior of sexual deviants.

As the mother of a young man, I taught him how to treat women, how to respect them, and how to protect himself from becoming a father at too early an age. Why did I teach him that last part? Well, some girls lie about taking their birth control. That’s why. I taught him not to strike a female, UNLESS they came at him like a male wanting to beat his ass. At that point, all bets are off, but I also told him to have witnesses around, because police were more likely to believe the female.

Families raise all their children to respect others. (Notice how I didn’t say all? I don’t generalize or try not to.) They don’t raise molesters or rapists. So, you see, we have already taught our young boys/men, “Not to rape”.

There is nothing wrong with teaching women how to defend themselves and how to avoid possibly getting attacked. This includes carrying a firearm, taking self defense classes, going out in groups with friends, and teaching them how to be aware of their own surroundings. The movement in the ‘60s was to empower women as well as to make them equal in society. This means teaching them NOT to be the damsel in distress.

Didn’t I call rapists and molesters “sexual deviants”? Why yes, I did.

This passage, from https://www.ncbi.nlm.nih.gov/pmc/articles/PMC3777344/ explains that it is a mental condition, not a taught habit. This means, you can instill you set of values on an individual as they grow, but if they are mentally wired to be abnormal in terms of sexual behavior, they are going to rape or molest the opposite sex regardless of lessons taught to them by their parents. It does mention that most are not disordered, but those who are disordered are more likely to commit the offense. This means, those that are NOT mentally disordered choose not to heed the lessons they were taught, and do what they want regardless.

The study begins by defining rape and also by outlining some myths. Here are some of the myths:

Women/men ask for it by the way they dress or behave.

This is a double edged sword for me. No, you are not asking to be raped because you chose to dress provocatively, but you could be sending mixed signals to the person who may rape you if you are flirtatious, suggest the two of you “hook up” or other suggestions like that. Am I saying you’re asking for it? Not in the least, you can still say “No” to the person, but if you did not intend to have sex with them, don’t throw out signals giving them the idea you do. That’s all I am saying.

Women/Men could avoid being raped if they wanted to

My first reaction was, “What the fuck? Who says this?” When a women is raped, it is most likely by a male. Men, though fems would end to argue until they are blue in the face, are stronger than women and can overpower them quite easily. This is assuming it’s that type of rape. Date rape is out of the question in terms of women being able to get out of it, because, more often that not, they have been drugged and are unable to move to get out of the situation. Women rapists, yes they exist, are more likely to drug their victims because of the difference in size and strength.

Hmmm, I may have touched on this a bit above, but they are referring to men with power and money. The most recent case I can think of is Bill Cosby. Now, I am not saying he is innocent, but why wait until now to come forward and not when it happened? Thirty women all saying the same thing cannot be overlooked, but waiting until he is too old to even survive prison, is suspect, just a tiny bit.

They enjoy being raped

Who the f—… Oh yeah, the roleplaying thing. That’s not all of us. If my husband were to suggest that, I would look at him like he had lost all of his marbles. Just because a woman, or man, like to role play rape, for whatever reason that I can’t fathom, that’s fantasy. That does NOT mean they want it to happen to them in real life.

This one isn’t in the article;

We’ve all heard this one.  “One-in-five women are raped on college campuses.” Let’s break this down, shall we?

In actuality, that number refers to the statistics on rape over a lifetime for the entire population.  Even though they site that statistic, what they casually leave out is that 2%-10% of those 1-in-5 are falsely reported. So let’s say 100 girls during the school year came forward, according to the stats, between 2 and 10 of them are lying. That creates more work for the police as they have to sort through the lies and examine evidence. I am not even counting the rapes and sexual assaults, like mine when I was younger, that go unreported.

Why not report them?

Think about it this way. You’ve been raped. You’re hurt, traumatized, and wondering how it could have happened. You also feel a little bit of shame. You shower and go on about your day and maybe get counseling to get past it, but you don’t report it.

When you report you’ve been raped, every time you have to tell someone what happened to you, you relive it, every moment of it plays back like a movie you can’t stop, and you have to tell it to the police officer, the detective, your lawyer, and if it goes to court, in front of strangers, reporters who are allowed in, and the person who raped you, not to mention the judge. You have to answer question from both lawyers, thus having to repeat yourself, yet again. This means you not only have been raped, but you have tell you story a minimum of six times. You have to relive that at least six times. You have to relive the hurt, the helplessness, the feeling of being violated, the shame, feeling dirty no matter how much you shower or bathe AT LEAST SIX TIMES NOT COUNTING THE ACTUAL INCIDENT. Do you understand now why most go unreported? It’s not that we won’t be believed, even though that is a danger as well, it’s that only a few of us are strong enough to relive it over and over again without completely losing our sanity.

What happens when you use rape and sexual assault as revenge?

Well, first, you make that person’s life miserable. Second, you make it harder for those of us that are actual victims to be taken seriously.

Oh, and as for the rest of my FB note?

If you are the victim of a rape, man or woman…

1. Do not bathe. This destroys evidence and makes it harder for the police to build a case.

3. Be accurate in your description. I know it’s hard, but don’t leave a single detail out. It could be, God-forbid, a serial rapist, and you could prevent it from happening to another.

4. Contact your local rape crisis center for counseling, meetings, and support to become a survivor. Don’t be like me and take over 30 years to realize you’re worth something.

P.S. Notice I included men? They get raped as well.

It's thw start of another week.
Monday update. #ohiosunrise