Hawaii volcano forces 1,500 from homes as lava bubbles up

HONOLULU — Nearly 1,500 residents were ordered to evacuate from their volcano-side homes after Hawaii’s Kilauea Volcano erupted, sending molten lava to chew its way through forest land and bubble up on paved streets. Volcano officials couldn’t predict how long Thursday’s eruption may last, prompting Hawaii’s governor to activate the National Guard to help with evacuations and provide security to about 770 structures left empty when residents sought shelter. There were no immediate reports of injuries. Steam and lava poured out of a crack in Leilani Estates, which is near the town of Pahoa on the Big Island. Videos showed lava spurting into the sky from a crack in a road. Aerial drone footage showed a line of lava snaking through a forest. County, state and federal officials had been warning residents all week that they should be prepared to evacuate, as an eruption would give little warning. Officials at the U.S. Geological Survey on Thursday raised the volcano’s alert level to warning status, the highest possible, meaning a hazardous eruption is imminent, underway or suspected. Nearby community centers have opened for shelter. The U.S. Geological Survey said new ground cracks were reported Thursday afternoon. The eruption comes after days of earthquakes rattled the area’s Puna district. A nearby school was closed due to the ongoing seismic activity and several roadways cracked under the strain of the constant temblors. A magnitude 5.0 earthquake was recorded hours before the eruption began Thursday. The Puu Oo crater floor began to collapse Monday, triggering a series of earthquakes and pushing the lava into new underground chambers. The collapse caused magma to push more than 10 miles (16 kilometers) down-slope toward the populated southeast coastline of the island. The magma crossed under Highway 130, which leads to a popular volcano access point, on Tuesday night.

Indian authorities have warned citizens they are facing five days of isolated thunderstorms and high winds, after dangerous weather left more than 110 people dead across northern parts of the country. Since Wednesday, fierce winds and lightning strikes created by a powerful dust storm have led to the deaths of scores of people in the states of Rajasthan, Uttar Pradesh, and Uttarakhand, and injured hundreds more, according to local officials. Today and tomorrow in some parts of western Uttar Pradesh,  are expecting thunderstorms, the authorities have been told to be on alert (for greater) loss of life so that they can respond. According to officials, this could be one of the most disastrous storms in recent times, as far as Uttar Pradesh is concerned. Electricity poles have been downed and trees uprooted across the region, leaving many households without power. Water shortages have also been reported. India is on the verge of its annual summer monsoons.

Law enforcement agencies are requiring residents and businesses 1-mile north of a Louisiana chemical plant to evacuate as an apparent fire broke out Thursday. Videos show massive plumes of smoke that were billowing from the FlowChem Technologies plant located in the town Duson, which is located about 16 miles northwest of Lafayette. Those within three miles north of the plant are told to shelter in place. Both lanes of Interstate 10 from the Lafayette I-49 exit to Crowley are closed. The Department of Environmental Quality is testing air quality before any evacuations are lifted. The company’s website describes the plant  as a “specialty oilfield chemical provider that operates across the Gulf of Mexico and U.S. onshore market with blending facilities located at Rayne, Louisiana and Pleasanton, Texas in U.S. and multiple warehouses. There was no word of any injuries or cause of the fire, but that the scene remained active through out last night.

US accuses China over ‘laser incidents’

The US has formally complained to China over several incidents of its pilots being irritated by lasers it says are coming from a Chinese base in Djibouti. The Pentagon said it had asked China to investigate what it called “very serious incidents”. Washington also said there would be consequences to “China’s militarization of the South China Sea”. Media reports have suggested China has stationed weapons systems on disputed islands in the region. The US has a military base in Djibouti on the Horn of Africa, which is used for counter terrorism operations in Africa and the Middle East. Last year, China opened its first overseas military base only a few kilometers from the US facility. The Pentagon said people at the base had been shining military-grade lasers at US pilots coming in to land. In the past few weeks, fewer than 10 incidents had taken place, she said. Meanwhile, the White House responded to reports of renewed Chinese activity in the South China Sea, including the reported stationing of military equipment on a number of disputed islands in the strategic water way. Several nations claim parts of the resource-rich South China Sea, but recent years have seen Beijing reasserting its claim. China, Vietnam, the Philippines, Taiwan, Malaysia and Brunei all have competing claims. 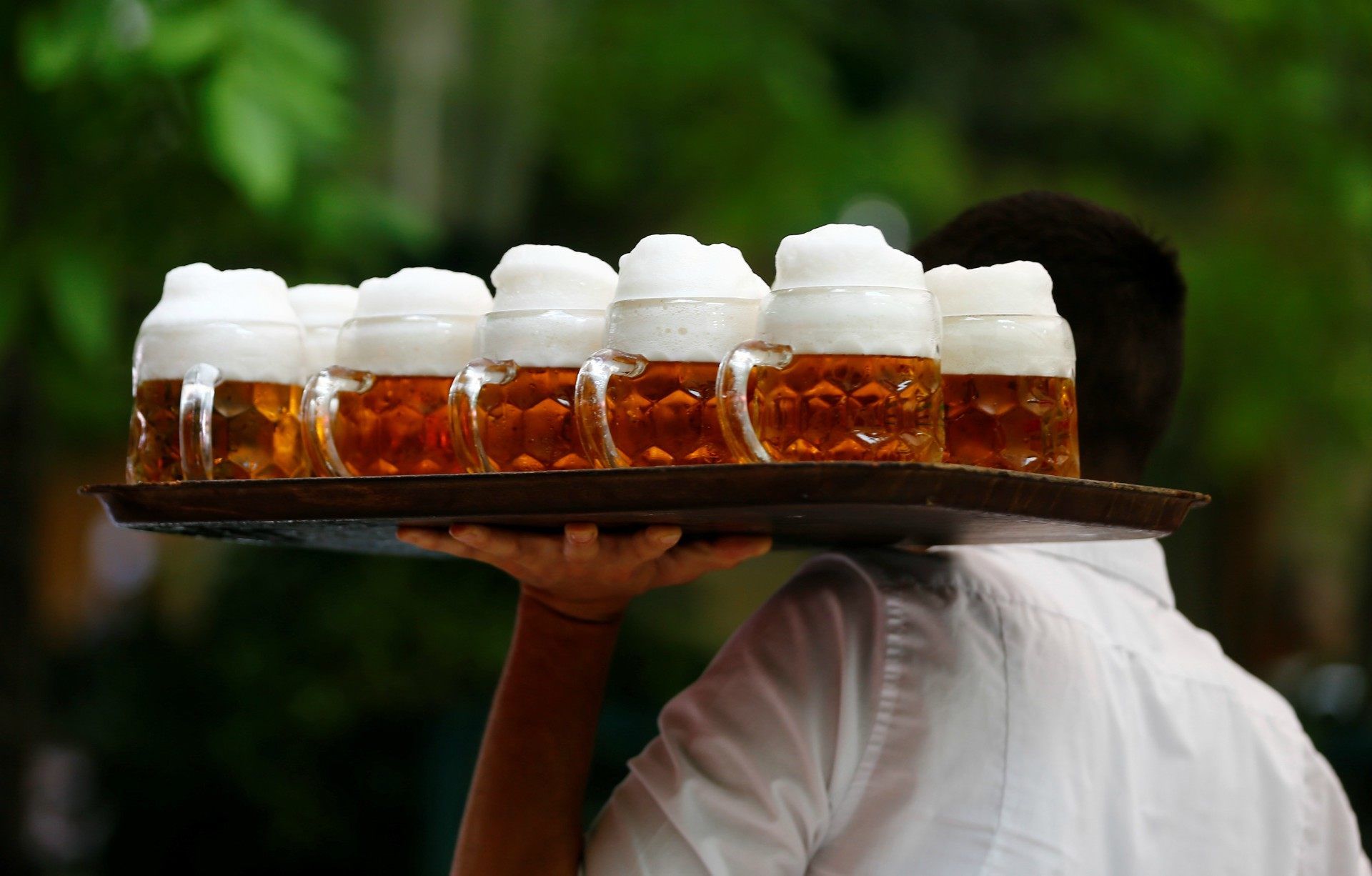 Old People Unite! Because an Orlando, Fla.-based Seasons 52  (a member of the Darden family of restaurants, which include the Olive Garden, Yard House and LongHorn Steakhouse) restaurant chain was accused of disproportionately rejecting applicants over 40 years old from both front-of-the-house and back-of-the-house positions. The alleged incidents occurred at 35 locations across the country, and the lawsuit includes some 254 plaintiffs, although more employees are eligible to come forward to claim a part of the settlement money. A total of 135 applicants told in sworn testimony that managers made a variety of discriminatory comments, such as: “Seasons 52 girls are younger and fresh,” “Most of the workers are younger,” and “Seasons 52 hires young people.” A manager even stated matter-of-factly that “old white guys” are not employable at the company. Additionally, the Equal Employment Opportunity Comission will require the restaurant chain to change its hiring practices and hire a compliance monitor to ensure that the terms of the agreement are followed. The EEOC emphasized that age discrimination is a particularly prevalent form of illegal workplace discrimination. Ordinarily, employers are eligible to discriminate among applicants only on the basis of characteristics considered “essential” to the job. “Although ageism is among the most common forms of employment discrimination, applicants who are turned down rarely know the reason why,” EEOC Trial Attorney Kristen Foslid said in a statement. “When an employer has a trend of rejecting older applicants, the EEOC will respond aggressively to combat age stereotypes.”

HOLMDEL, N.J. — School staff at a New Jersey high school have been finding human feces near their track “on a daily basis,” police say, and now an unlikely suspect is charged — the superintendent of a nearby school district. Thomas Tramaglini, 42, the superintendent of the Kenilworth school district, is facing municipal court charges of lewdness, littering, and defecating in public, the Holmdel Police Department said in a Facebook post. The department says they were notified by a school resource officer that staff and coaches were repeatedly finding feces on or near the track and football field area at Holmdel High School, which is in a different district. Staff and the school resource officer monitored the area and identified Tramaglini as the suspect. Holmdel Sgt. Theodore Sigismondi said the suspect was there to run on the track just before 6 a.m. May 1 when he was arrested. He wouldn’t say how officials identified Tramaglini as a suspect or whether officers saw the alleged act that led to the charges. He said the charges relate only to the May 1 incident, but said Tramaglini is suspected in the other incidents as well. In a statement on Facebook, the Kenilworth school district said that “given the nature of the charges,” Tramaglini asked for and was granted a paid leave of absence. According to NJ.com, Tramaglini has been the Kenilworth superintendent since 2015, and had previously worked as chief academic officer in Keansburg and held positions in Plumsted and Freehold Borough. He is also reportedly a part-time lecturer for the Rutgers Graduate School of Education.