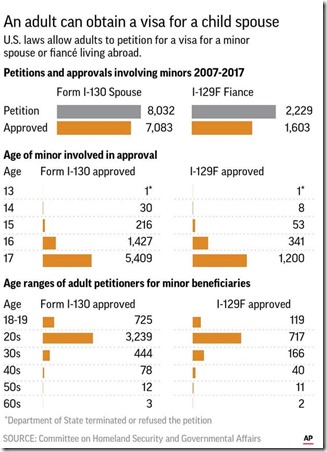 What you’re seeing on the left is a chart of the petitions and approvals of visas for child marriages in the United States. Immigration laws allow visas for spouses and fiancés living abroad. It is being speculated the coupling of lax marriage laws in the U.S. and the law cited on the left could also be fueling forced marriages in America.

The approvals for the petitions are legal as the Immigration and Nationality Act does not have any minimum age requirements. If fact, the Act allows U.S. Citizenship and Immigration Services to factor in whether the marriage in the petition is legal in the country of origin and also if it is legal in the state of the petitioner. Though many states set the age as 18 for marriages, there are states who allow marriages of 16-year-olds with parental consent, and in many other states, which include New York, Virginia, and Maryland, under 16 can get married with the court’s permission.

Republican Senator of Wisconsin Ron Johnson was not pleased with the findings of the ten-year study and stated, “It indicates a problem. It indicates a loophole that we need to close.”
There has been no updates to this story, which originated on January 11, 2019.

Sources for this story: